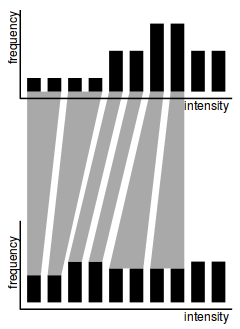 The constant image brightness (CIB) assumption assumes that the intensities of corresponding points in two images are equal. This assumption is central to much of com-puter vision. However, surprisingly little work has been performed to support this assumption, despite the fact the many of algorithms are very sensitive to deviations from CIB. An examination of the images contained in the SRI JISCT stereo database revealed that the constant image brightness assumption is indeed often false. Moreover, the simple additive/multiplicative models of the form Ir = b Ib + a do not adequately represent the observed deviations. A comprehensive physical model of the observed deviations is difficult to develop. However, many poten-tial sources of deviations can be represented by a non-linear monotonically increasing relationship between intensities. Under these conditions, we believe that an expan-sion/contraction matching of the intensity histograms represents the best method to both measure the degree of validity of the CIB assumption and correct for it. Dynamic histogram warping (DHW) is closely related to histogram specification. However, it is shown that histogram specification introduces artifacts that do not occur with dynamic histogram warping. Experimental results show that image histograms are closely matched after DHW, especially when both histograms are modified simultaneously. DHW is also capable of removing simple constant additive and multiplicative biases without derivative operations, thereby avoiding amplifica-tion of high frequency noise. It is demonstrated that DHW can improve the estimates from stereo and optical flow estimators.