Direct Estimation of Rotation from Two Frames via Epipolar Search 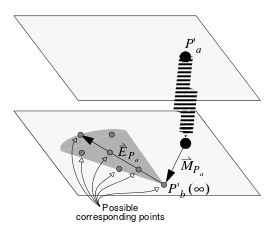 A direct method for estimating the rotational motion between two image frames is developed. The algorithm does not require knowledge of image correspondences, optical ﬂow or scene structure and only assumes approximate knowledge of the translational motion. Spatial and temporal intensity gradients are avoided, resulting in an algorithm that is noise resistant. Moreover, the algorithm does not assume a particular projection model and is valid for both orthographic and perspective models. It is based on a statistical measure of epipolar misalignment. Speciﬁcally, that (1) the intensity histograms of corresponding epipolar lines are invariant (ignoring occlusions) and, more importantly, that (2) the histograms of “almost corresponding” epipolar lines are similar. This latter property is a function of the spatial correlation present in the image and it is empirically demonstrated to be well behaved over a large class of scenes. These epipolar properties of histograms, i.e. that the difference between two histograms is a minimum when the two epipolar lines truly correspond and (approximately) increases monotonically with the degree of misalignment between two “epipolar” lines, allows the rotational motion to be estimated in a straightforward manner as a 3-dimensional “epipolar search”. Experimental results are presented on the SRI JISCT stereo database to empirically support the epipolar properties of intensity histograms. The calibrated NASA helicopter ﬂight sequence is then analyzed to quantify the accuracy with which the rotations can be estimated. Experimental results indicate that very precise rotational estimates can be achieved.